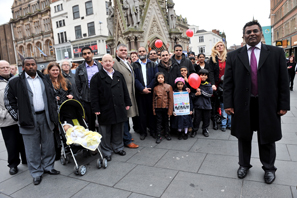 A councillor hoping to become the city’s first directly-elected mayor is relying on offering a fresh face with a fresh start to win the vote.

Friday was the closing date for people to put their hats into the ring to become the official Labour candidate.

Among them is Abdul Osman, Leicester City Council’s cabinet member for regeneration and transport, who said people were ready for a new face in charge of the council.

He said: “I can offer a fresh start and a fresh face. At 46, I’m the youngest of the candidates but I will bring more accountability by holding mayoral forums four times a year if I’m elected.

“I want to bring Leicester out of the shadows and one of the things that needs to change is how things are governed.”

Councillor Osman launched his “Abdul 4 Mayor” campaign at the Clock Tower in Leicester city centre on Saturday afternoon. He spelled out his policies for improving the lives of people in the neighbourhoods around the city.

He said: “One of the things we can improve is the level of regeneration in the outer areas of the city.

“We need to find external funding for improvements to the infrastructure, more housing and better shopping areas.

“I think Leicester also needs better transport and as mayor I would like to sit down with the bus companies and work out a way to redirect resources from areas like parking into more bus services.”

Among Coun Osman’s supporters on Saturday was Councillor Barbara Potter.

She said: “Abdul is different. He can face challenges and he listens to the people.

“If he wins he will also have a good team working for him.”

He said: “At the end of the day I’d like to see an elected mayor without any baggage.

“We need someone willing to take the risks. Abdul has proved he can do that in his regeneration role.

“It’s going to be an interesting race.”

The directly-elected mayor will oversee the council’s 16,000 staff and balance the books on a £500 million budget.

The role of elected mayor will be totally separate to that of Lord Mayor, and will be similar to the council leader but with extra powers, such as being able to select a cabinet.

The public vote for mayor will take place in May.

Councillor Abdul Razak Osman, cabinet lead for regeneration and transport, fears a decrease in student numbers will harm economic growth across the city and cause job loses.

He said: “There are currently 35,000 students in the city and the effects on the economy of Leicester are going to be dramatic.

“We already have a problem of graduate retention in this city; decreasing numbers of students is going to make the situation worse.

“If these cuts go ahead there is going to be a lack of skill sets in the city.”

University of Leicester graduates have featured in a DVD just released by Leicester City Council and Prospect Leicestershire, encouraging technology and science students to stay in the city.

“We are going to be left with a brain drain in terms of professional skills. The government don’t seem to have thought this through.”

As well as hurting existing business in the city Cllr Osman believes the decrease in students could stunt the city’s growth. “There will be a lack of confidence for future development,” he said.

This is an opinion shared by Owen Jones, a Sabbatical Officer at University of Leicester Student Union, who said: “With 80% cuts in higher education you can’t build new buildings.”

Cllr Osman, who spent 14 years working in education, believes that the higher fees and lack of funding at sixth form level will cause a merging of education faculties and closing of facilities.

“The job losses could be tremendous,” he added.