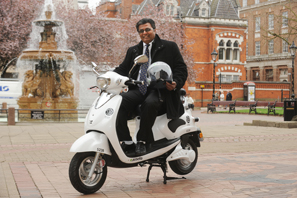 ‘Boris Bikes’ scheme could be set up in Leicester (with poll)

A city-wide bike hire scheme could be set up in Leicester.

Abdul Osman, Leicester City Council’s transport and regeneration chief, said the authority was planning to submit a bid to the Government for up to £10 million next month.

If the bid is approved, racks of bikes would be set up across the city which people would be able to hire for short periods for a small fee – similar to the “Boris Bikes” scheme in London.

The bid is likely to include a request for cash to create cycle routes and lanes and to improve existing lanes.

Coun Osman said: “We want to build on the success of Sky Ride to make Leicester a cycling city.”

The council is bidding to the Local Sustainable Transport fund. It will learn if it has been successful in April or May.

Coun Osman said: “Money is available to councils which wish to improve green forms of transport. Our drive to make it easier to cycle fits with this.”

The exact amount the council will ask for is to be finalised.

“There’s a lot of scope – the cost could range from a few thousands pounds to several million,” said Coun Osman.

Malcolm Hunter, of Leicester Friends of the Earth, said: “On the face of it this sounds like something we’d support.

“If people are given feasible alternatives to using their cars then they’re likely to use those.

“There’s an appetite for cycling because of its benefits to the environment and to physical fitness.”

Boris Bikes – officially Barclays Cycle Hire – has proved popular since it was launched in July last year, and is set to be expanded in time for the Olympic Games next year. About 8,000 bikes will be available from 14,400 docking points at hundreds of locations.

Announcing the expansion, Deanna Oppenheimer, of Barclays, said: “It is clear that with 100,000-plus members and more than 1.5 million journeys since the launch, London has embraced Barclays Cycle Hire.”

It will cost about £140 million over six years but the scheme is expected to eventually pay for itself.

However, a scheme launched in January 2009 in Bristol ended after less than 18 months.

Under Hourbike, anyone over 12 could rent bikes for any length of time from secure bike racks at “hubs” across Bristol.

The scheme, partially funded by the city council but mainly operated privately, struggled as only 240 people signed up as members.

Bristol City Council spokeswoman Kate Hartas said: “The Bristol pilot was never large enough to be workable in the long-term but it provided the council and the operators with useful data on how to develop a similar scheme.”

Leicester City Council last month announced a pay-as-you-go car hire scheme which it hopes will cut the number of people who drive into the city.

The authority is to work with rental firm Hertz on the car club, initially for a two-year trial period.

If the scheme goes ahead this year, eight cars will be available for club members at four sites in the city centre.