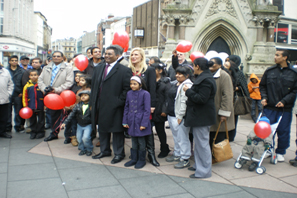 Councillor Abdul Razak Osman, cabinet lead for regeneration and transport, fears a decrease in student numbers will harm economic growth across the city and cause job loses.

He said: “There are currently 35,000 students in the city and the effects on the economy of Leicester are going to be dramatic.

“We already have a problem of graduate retention in this city; decreasing numbers of students is going to make the situation worse.

“If these cuts go ahead there is going to be a lack of skill sets in the city.”

University of Leicester graduates have featured in a DVD just released by Leicester City Council and Prospect Leicestershire, encouraging technology and science students to stay in the city.

“We are going to be left with a brain drain in terms of professional skills. The government don’t seem to have thought this through.”

As well as hurting existing business in the city Cllr Osman believes the decrease in students could stunt the city’s growth. “There will be a lack of confidence for future development,” he said.

This is an opinion shared by Owen Jones, a Sabbatical Officer at University of Leicester Student Union, who said: “With 80% cuts in higher education you can’t build new buildings.”

Cllr Osman, who spent 14 years working in education, believes that the higher fees and lack of funding at sixth form level will cause a merging of education faculties and closing of facilities.

“The job losses could be tremendous,” he added.